The most curious place left on earth

Before I made the video “Where Nature Rules” (which won 3rd prize at the international Film Award Ceremony Golden City Gate at ITB in Berlin 12. march 2009) I sketched up some thoughts on what it was I wanted the little film to express. In the film I narrowed the text down quite a lot – but here are the thoughts in full length. 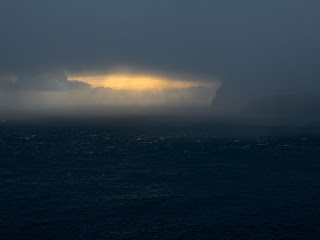 When your brain is overloaded. When you’re tired of noisy traffic. When you’re sick of heavily polluted air. When you’ve had enough of stressed out people everywhere around you. When you’re plagued by mosquitoes and a merciless sun. When you can’t stand being constantly sweaty and uncomfortable all the time. When you really need to breathe freely. When your only wish is to come to your senses and feel alive and grounded again. 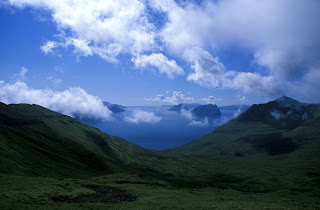 Think of the Faroe Islands as the Land of Space… with an abundance of invigorating fresh air. Like coming home to a cool paradise with space to stretch your mind and body. To the Shangri-La of the north. To freedom. 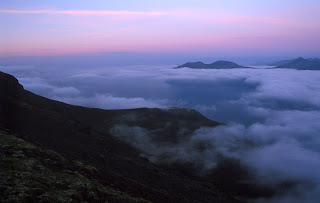 Imagine a Land of Secrets. A little country hidden away from the rest of the world, where people have been living a simple life for centuries, almost in secrecy. But now – while technology makes the world smaller – the secret is about to be discovered. Imagine a group of magical mystical islands out there in the cool misty ocean, rising steeply, almost a thousand meters from the sea and up above the clouds. Imagine that behind the steep dramatic cliffs you’ll find narrow fjords, sounds and green valleys with small, colorful cozy villages. Imagine this place never too hot – and never freezing cold. Always fresh. A mild and gentle country with mild and gentle people living in it. 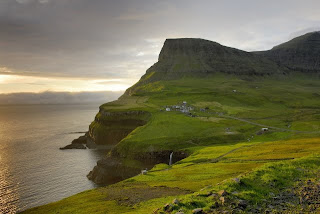 Imagine this tranquil, peaceful, safe place to be – while on the other hand dramatic and challenging. One moment the weather is wild and roaring and the next beautiful and kind – colouring the landscape in a palette of colours you didn’t know even existed. 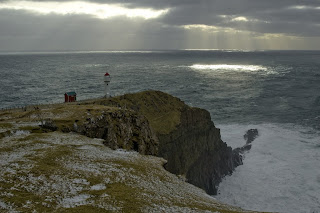 Imagine this place where the air is constantly changing between misty or rainy and crystal clear –– one minute boisterous and violent and the next dead calm. One moment nature barks fiercely at you – the next it hugs you gently and lovingly. 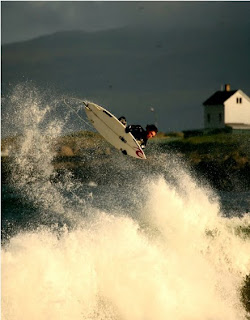 Imagine winds that at times in winter can reach velocities up to 60-80 meters per second creating huge waves that plunge into the cliffs sending explosions of foam sometimes hundreds of meters up in the air. Imaging riding these huge waves on a surf board. 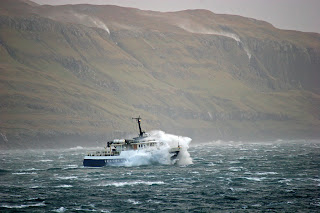 Imagine a place where water is everywhere in some form or another. The sea is almost always in sight – when not hidden in fog – and on land endless rows of waterfalls flow pretty much everywhere down the mountainsides. Sometimes even upwards, depending on wind speed and wind direction. 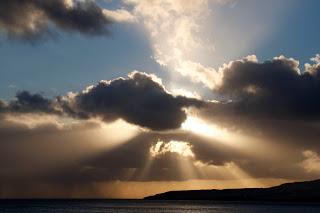 Imagine one of the wettest and wildest countries on earth – the very place the weather gods chose to be their playground. A place where you can experience all seasons in one day. A challenging place where you’re never allowed to forget that nature is in control. 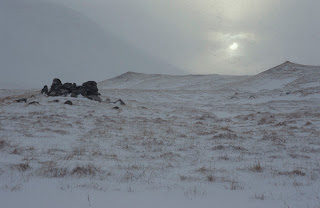 Imagine a place where you have to let go of control. Anticipate nothing but surprises. Imagine the thrill never really to know when to do what because it’s more up to nature’s mood than up to you. Storms or fog might always come in the way – sometimes for days – and you will simply not survive if you don’t adjust to nature. 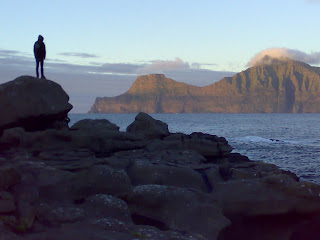 Imagine how it trains your ability to be patient and to be fully aware of the instant – whatever it might bring. Just being present in this world here and now because you need to be prepared for the unpredictable – always. 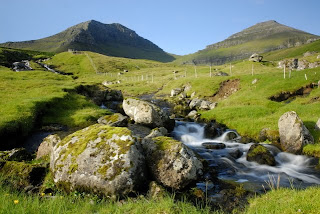 Imagine this Land of Brooks and Waterfalls – a place where nature rules – not people. You can do nothing else but surrender. But if you’re patient nature will reward you with magnificent gifts and pleasant surprises when you least expect it – like beautiful sunny days. 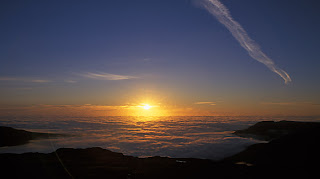 Imagine standing on the highest point on these islands when the air is crystal clear and the valleys and the fjords under you are filled with milky, fluffy mist. Imagine the vastness above, under and around you – like standing on top of the whole world. Imagine being able to see the longest anywhere in the whole world…. endless rows of mountaintops to one side and to the other the never-ending ocean… and there – far, far away 500 km to the northwest – the top of a glacier rise just above the horizon – Vatnajøkull in Iceland which under certain circumstances according to Guinness Book of Records can be seen from the top of the highest mountain in the Faroes – Slættaratindur. Imagine how small and humble and thankful for being alive this view would make you feel. 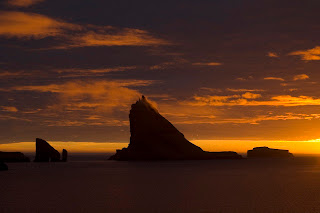 Imagine a Land of Contradictions – a group of islands which in themselves are a contradiction. They shouldn’t even be there – it’s a miracle that they’re still standing. The mere presence of these wind-swept rocky cliffs is like an insisting vertical protest against the vast horizontal flatness of the ocean that surrounds them. 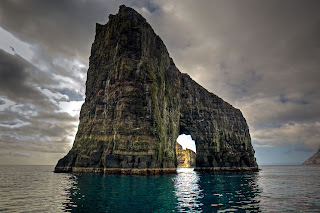 Imagine how fiercely these islands must have fought for millions of years with the forces of the mighty ocean. Imagine this everlasting battle that created the highest vertical sea cliffs in the whole world. 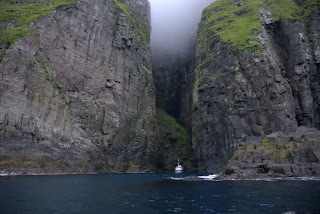 Imagine this archipelago – so tiny, and yet so strong and breathtakingly majestic. Vastness and closeness in one. So far away and yet just round the corner thanks to modern transportation. In the middle of nowhere in a huge ocean, and yet in the middle of everything right in the busy sea lane between two of the wealthiest continents in the world. 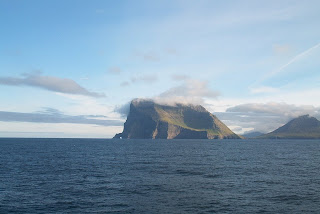 Imagine going to this Land of Nowhere – on the one hand perfect for stillness and meditation, and on the other hand, when you’re tired of sitting still, you can go surfing, boat racing, porbeagle shark fishing, rappelling, exploring caves, hiking pilgrimage trails, driving Harleys or go sightseeing from boats or helicopters to some of the most dramatic cliffs in the world. 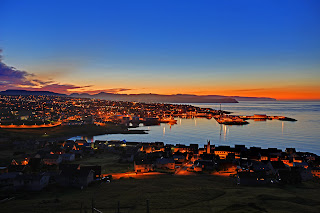 Imagine finding a safe haven – a hideaway where you can escape from a stressed and overcrowded world and find that Land of Comfort you long for, far from a civilization gone

mad, but not too far away. Just 1-2 hours’ flight from some of the big cities in Northern Europe – like Copenhagen and London. Imagine finding peace and tranquility like nowhere else in the world in this place where people still trust each other – actually the most crime-free place on earth according to statistics. 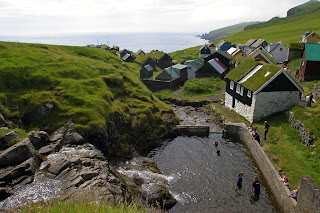 Imagine being able to combine all the comforts of civilization with the sense of being back in the past when the air was not polluted and the water still fresh. Imagine being able to feel what pure wild nature is all about – and at the same time be able to enjoy all the qualities of modern life. 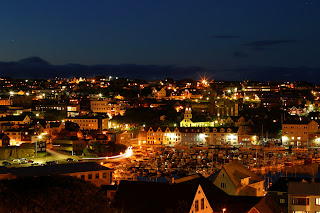 Imagine a cozy colorful town where you can stroll in a shopping centre in the morning. Go hiking, sailing or fishing in the vicinity of the town in the afternoon. Sit in a café or a restaurant enjoying a good meal or a drink in the evening. And stroll by the sea in the light summer night, go to a rock concert or go dancing in a night club with fun people all night long. Doing pretty much the same as most people enjoy doing everywhere else – but in a unique Faroese way. Imagine one of the most modern countries in the world – yet ancient and pristine at the same time. Convivial and familiar – and yet so peculiar and mysterious. 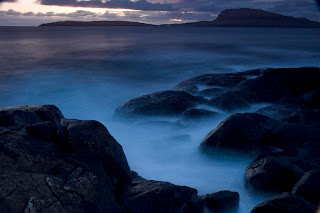 Imagine a Land of Inspiration – a little country with only around 50.000 inhabitants, but still a whole country – a micro cosmos with everything a modern society requires. Now you can – more easily than ever – go to these fairy islands and experience how life unfolds here – the sea, the air, the birds, the sheep, the people, the music, the language, only spoken by about 70.000 people in the whole wide world… and so much more to discover. Imagine finding a whole world of surprises here. A rich culture with an amazing variety to offer.

Imagine a place that sings. A little fairyland riddled with all kinds of music where almost every single village has its own choir. Where the main town even has its own symphony orchestra of high quality which most people would consider impossible for a town with only 20.000 people. Imagine skilful locals playing, singing and dancing traditional folk ballads, jazz, classical, punk, rock, electronica…. you name it. The diversity is astonishing. 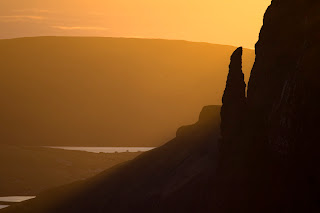 Imagine a certain vibrant energy to this place that inspires and boosts creativity – with a light and colours so special and a peace that touches your soul in such a way that many visiting painters, musicians, poets and other artists fall in love with it instantly and feel the urge to come back year after year – or even to live here permanently – just to be inspired. 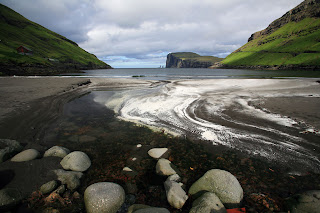 Imagine a Land of Authenticity – a place where tourism has not become a big industry yet, so people are not yet tired of tourists. They still can afford to welcome each and everyone with heartfelt kindness and openness because the number of foreigners is still relatively small. 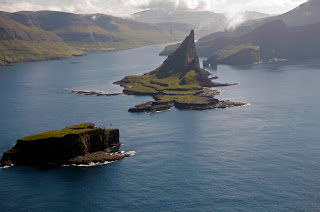 But… for how long will it remain so? It might be just a question of time before more and more people in the outside world will be aware of this hidden gem. It’s there now for people to experience. So when you feel overloaded. When the complexity of the modern world overwhelms you… 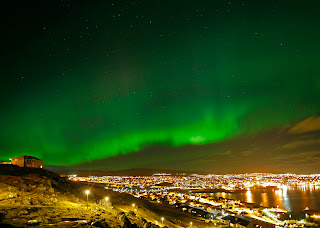 When you want to be safe from the restlessness in the rest of the world. When you dream of a simpler life in close contact with nature – but in a comfortable modern way. When you want it all – just in a much smaller scale. Remember then this almost secret place out there in the ocean, not too far away, that not many other people visit – nor have even heard of. Here you will find the simplicity and the safety you’re searching for.
It’s not a fairy tale. It exists. And it’s called the Faroe Islands – maybe the most curious place left on earth.
Elin Brimheim Heinesen, 2009
The photographs (by Janus Hansen, Ólavur Frederiksen, Daniele Photography and Yazzy Ouhilal) are the same as the ones I used in the video “Where Nature Rules”.
Visit: http://www.faroeislandsreview.com

Permanent link to this article: http://heinesen.info/wp/en/blog/2009/08/19/the-most-curious-place-left-on-earth/